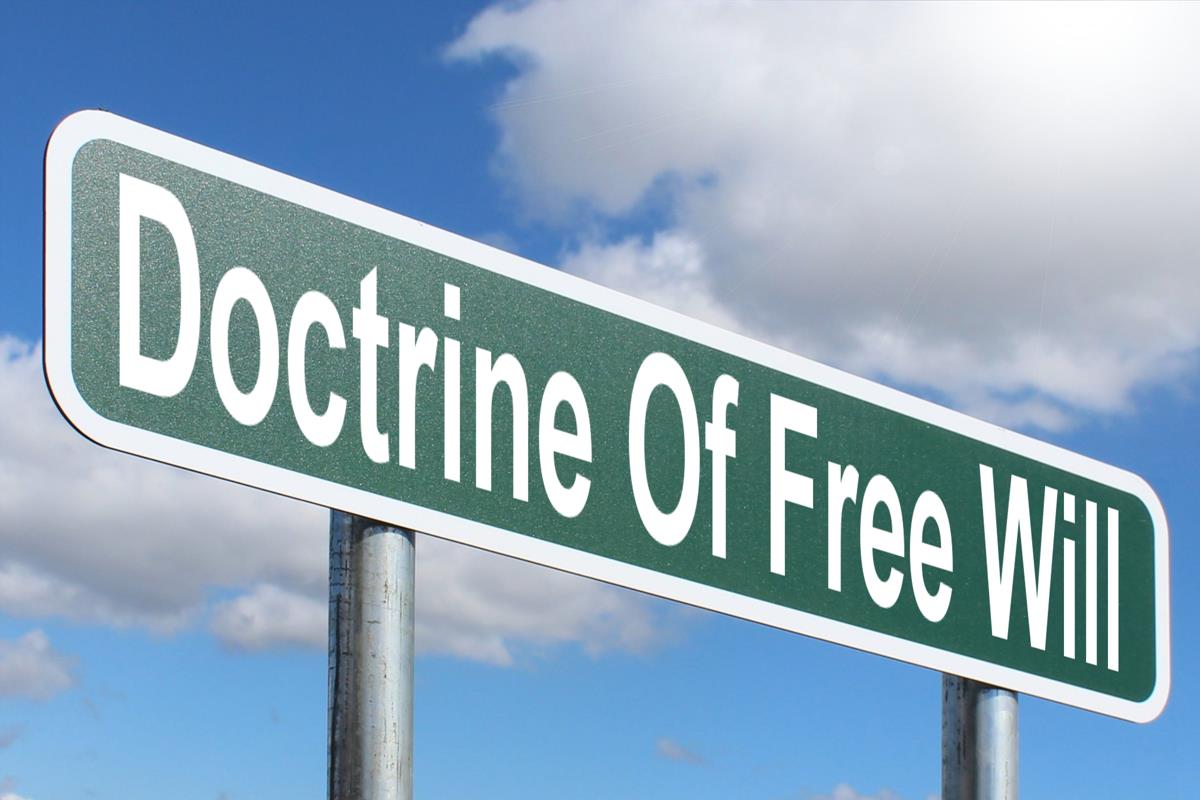 The views and opinions expressed here are just that. You will make up your own mind. Rom 14:12

People who love the Lord have various views in relation to the term free will. We agree that we make choices. I also agree that we have something called a “sense of agency”. Sense of agency refers to the feeling of control over actions and their consequences.

There are two aspects to the discussion of will in the Bible. God’s will and man’s will. The will of man is called “self-willed” but never free-willed. From there we drill down into two ways it applies. First is the point of salvation and God’s elect. The second is simply our daily lives.

Free will like predestination, has had volumes written on the subject over the millennia. Defining free will from a Christian point of view is extremely difficult. Why? The term free will does not exist anywhere in the Old or New Testament.

The idea of free will goes back to early philosophers. It is quite complicated and would take the average person a very long time to study in its entirety. However, the Bible does talk about choice but there is no indication that it is “free” from the control of God.

In modern understanding, free will joins two words meaning very different things. For ease of understanding here is the definition found in the Oxford Dictionary:

In the definition above the word “power” is the “will” and “controlled” is defining characteristic of “free”, i.e. free from control.

Biblically we understand God is all-powerful, often called omnipotent. All and “Omni” means just what it says, all. All power resides with God. In order for man to do anything that power must be granted by God. If it is granted then it is not free from His control.

I can see the wheels turning in your head as they have also turned in my mind. The question comes, if God grants me the power (and he does) then doesn’t God have to let go of the control making it mine and free?

That could be the case if it were not for two other “Omni” attributes God possesses. Those two attributes are His all-knowingness and His always present nature.

If God gave you power without knowing what you would do then yes, you would be free from His control. He did not blindly give you the power to act. Add to that idea God is all places at once, always present. It is not like He is waiting for things to manifest. That is the limitation of His creation, not His nature.

Man is never free from the control of God. We can and do say God allows us to sin, to choose evil over good. As a matter of fact, this is the root cause of our problem. We are told the first sin was to eat from the tree of the knowledge of good and evil.

The question is: Did God know we would sin before we were created? Yes. At the time was God all-powerful? Yes. Is God always present, past, present, and future? Yes. One of the problems with the structure of these questions is using the words “before, present and future.” These are words that have meaning to man but not God.

I want to reiterate what I have said elsewhere. If you do not agree with the Omni Attributes of God then we are not discussing the same God.

In some sense, we could express free will as sinful will. The single time we see a man making a choice before the fall it was to sin against God.

In the Bible, the concept of will exists as well as the concept of making a choice. When you add the word “free” in front of the word “will” you have now created the problem. It is a man-made problem. We easily agree there is something we identify in ourselves as the “will”. It might help to view this as the power of God in us. After all, we are made in His image. The problem does not lie with that word. It lies with the word “free.”

In the Christian view, there is only one being with free will. That being is called God. His will is also perfect. Man has a will but does not have free will. 2 Peter 2:10, James 4:14 – 16

The quote below furthers the discussion:

In other words, a man can wield the power he is given, but he cannot discern where the power comes from. If man could will as he wills then man would be God.

Man can, at the very least theoretically, make a predestined choice. Those two things are not mutually exclusive. In order to have free will you would have to know every option and have the power to carry out whatever you will.

Who wins when a man’s will collides with God’s will? As we already stated in our post on Predestination, God has already authored the book, movie, or however, you like to view it. The end was written by God who is not subject to time.

Before Jesus was crucified we have His prayer recorded.

“Father, if you are willing, take this cup from me; yet not my will, but yours be done.”

An angel from heaven appeared to him and strengthened him. And being in anguish, he prayed more earnestly, and his sweat was like drops of blood falling to the ground.

From that passage above, we notice that Jesus saw two wills, his will, and the Fathers’ will. If anyone had a will that was free it would have been Jesus, God in the flesh! Much of the Bible is about the struggle between your own will and the perfect will of God.

This is why it is so tempting to call our will free. It is never free. It is invariably in a state of struggle between our own will and the will of God as shown in scripture. If our will was free it would not be a struggle.

May I suggest a truly free will is a will that is completely aligned with God? Isn’t this what we pray for? Isn’t it what we Christians really want?

Could we say those who want a will that is free from the control of God want a sinful will? If so, that would be at the heart of the matter wouldn’t it? Isn’t that what Adam wanted, to disobey God? He followed Eve who listened to Satan. In addition, Adam, unlike us, walked with God and met with Him face to face! Adam lost his freedom to meet with God face to face and now faced death.

The Bible is clear even when it comes to simple things.

Why, you do not even know what will happen tomorrow. What is your life? You are a mist that appears for a little while and then vanishes. Instead, you ought to say, “If it is the Lord’s will, we will live and do this or that.” As it is, you boast in your arrogant schemes. All such boasting is evil.

Often the discussion of free will revolves around the ability of a human being to accept Christ as their savior. This is another granular area we can address in detail later through Scripture and reason. However, the passage above certainly indicates man can boast about what he “will” do but if it does not coincide with the “will” of God then it isn’t going to happen.

The view from value

In a recent discussion with Brother Mac, who believes God has given us free will, we reached a conclusion about our differences.

Mac believes if we do not have free will then there is no value in a relationship with God. I once thought that way myself. I do not think that is true.

The crux of the matter with Mac is what one person sees as having value may differ greatly from another. The old saying “one man’s junk is another man’s treasure” comes to mind. Value is very subjective.

During the course of our conversation, Mac brought up loving a wife. He said if you do not love her because of a free will choice then the relationship has no value. This thought is based on traditional American culture.

On the contrary, arranged marriages were the norm for most of human history. For most of mankind’s history, especially in Biblical times, parents or necessity chose who you would marry. There was no “free” choice. Research shows no better results for types of marriages, arranged or autonomous. That may be hard for modern Americans to wrap their heads around.

Christians are the Lord’s freedmen. The slave is free under Christ and the free man is now Christ’s slave. 1 Corinthians 7:22 Freedom in Christ is the only real freedom to be had. Redemption is about a return to innocence and a place where our will is aligned with God. If something akin to free will ever existed we might better call it corrupt will. Nevertheless, not my will but your will be done!